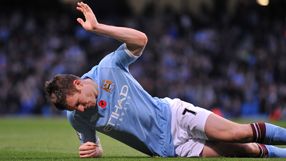 The disgruntled fans gave their verdict after Roberto Mancini's expensively assembled team had been held to a 0-0 draw by a disciplined but limited Birmingham City side.

It was their third Premier League home match without a goal and left the home fans jeering the players off at the end.

As in Wednesday's drab goalless stalemate with Manchester United, there was a distinct lack of entertainment against a Birmingham team who are just above the relegation zone.

What really upset the fans was the 83rd minute substitution of top scorer Carlos Tevez for midfielder Gareth Barry.

That was perceived as a lack of ambition by Mancini, who has come under increasing pressure because of the poor form and lack of goals from his side over the last month.

City coach David Platt said Tevez was carrying an injury and it was wiser to take him off rather than risk aggravating it.

Mancini also defended himself saying: "If you play with four strikers, it doesn't mean you score four goals. Football isn't like that, I have to think like a manager, not a supporter."

But former Manchester United striker and Talk Sport radio pundit Alan Brazil this week dismissed Mancini's chances of rbining the title to City for the first time since 1968.

He said he was "too Italian in his thinking", too cautious, not adventurous enough and relied too heavily on defence.

City do have the second best defence in the league behind Chelsea, with only 10 goals conceded, but they have scored only 15 times in 13 games - seven from Tevez who thought he had another on Saturday before it was disallowed for handball.

Rather than chasing champions Chelsea and Manchester United for the title, Mancini said he would be happy to finish fourth and secure a Champions League qualifying spot.

But the boos from the fans on Saturday tell their own story after another poor performance following a largely negative display in the midweek draw with United at Eastlands.

Platt told the BBC that Saturday's result was "hugely frustrating", adding: "I think those frustrations are born from the fact of what objectives this club has got now.

"We are still in a healthy position in the league and will continue to work this week to try and rectify the problem of trying to unblock games quicker so people will have to come out against us."

Before winning 2-0 at West Bromwich Albion last Sunday, City had lost three successive games against Arsenal, Wolverhampton Wanderers and Lech Poznan in the Europa League so Wednesday's point against United could be perceived as an improvement.

However, the Old Trafford side are playing well below their best and Mancini's position is now being compared to that of Mark Hughes, who was sacked as City boss last December.