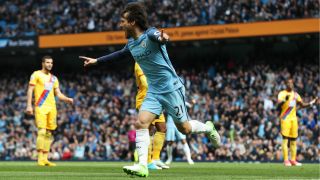 Manchester City were totally dominant as they strengthened their case for a top-four finish with a 5-0 Premier League battering of Crystal Palace on Saturday.

Goals from David Silva, Vincent Kompany, Kevin De Bruyne, Raheem Sterling and Nicolas Otamendi were no more than City deserved as they outclassed their visitors at the Etihad Stadium.

Silva put City in front inside two minutes despite only returning to training on Thursday, but Pep Guardiola had to wait until the early stages of the second half for Kompany to double his side's advantage with his second goal in four matches.

The three points were in the bag when De Bruyne slotted home just short of the hour mark, with Palace's best chance having fallen to Christian Benteke late in the opening period – Willy Caballero on hand to deny the striker with an excellent save.

Sterling added further gloss to the scoreline with his first Premier League goal since February, before Otamendi completed the rout by heading home a fifth in second-half stoppage time.

The result lifts City above Liverpool into third on goal difference, with Jurgen Klopp's men hosting Southampton on Sunday, while Manchester United are four points back in fifth ahead of their trip to Arsenal.

Palace remain six points clear of the relegation zone but would be reeled closer to danger by wins for Hull City and Swansea City later on Saturday.

1 - This is the first time that Sterling/Silva have both scored in the same Premier League game for Manchester City. Metallic. May 6, 2017

Silva's inclusion in the City starting XI was something of a surprise following Guardiola's pessimistic assessment of his fitness on Friday, but he started and finished the move that put the hosts ahead.

A ball over the top to Raheem Sterling was lifted back across goal by the England international, and Martin Kelly's poor defensive header landed kindly for Silva to get City off to a flying start with a low drive into the bottom-right corner – his 50th goal for the club.

City had their tails up and were on the attack again shortly after. An apologetic Michael Oliver thwarted them on that occasion, the referee prematurely blowing for a free-kick when the advantage should have been played.

Crystal Palace's unfamiliar defence, featuring Jeff Schlupp at centre-back, was being given a thorough examination by a hungry City attack, led alone by Gabriel Jesus in the absence of the injured Sergio Aguero, and Fernandinho's strike from distance stung the palms of goalkeeper Wayne Hennessey after 10 minutes.

Silva was everywhere for City, showing no lingering symptoms of the injury that has kept him sidelined for two weeks, and the only frustration for Guardiola will have been that his team were unable score the second goal their first-half dominance merited – Sane twice denied by Hennessey.

Palace did show signs of life before the interval, but Wilfried Zaha's tame cross from space on the left halted a promising move, before Willy Caballero got down brilliantly to keep out Benteke's header.

City's second arrived just four minutes into the second half, though, when Kompany hammered an effort into the top-right corner after being found by De Bruyne in space inside the Palace box.

2 - Vincent Kompany has netted two goals in his last four Premier League games, as many as in his previous 43. Presence.May 6, 2017

A move that started with a Palace throw-in ended with Jesus touching the ball on to De Bruyne on the edge of the box, and the Belgian picked his spot in the bottom-right corner. Hennessey got a hand to the shot but was unable to keep it out.

City made it 4-0 eight minutes from time, when Sterling fired in a left-footed half-volley from the centre of the penalty area amid non-existent Palace defending, and Otamendi headed City's fifth in injury time - a fair reflection on the gulf in quality between the two sides on the day.