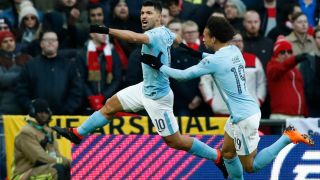 Andre Villas-Boas believes Pep Guardiola has Manchester City playing "fantastic" football this season - and feels the foundations are in place for the club to enjoy long-term success.

Guardiola picked up his first trophy with City on Sunday, as a resounding 3-0 triumph over Arsenal secured the club's third EFL Cup triumph in the space of five years.

It is unlikely to be their only piece of silverware in the current campaign, however, with the Premier League title expected to follow given their healthy over closest challengers Manchester United.

They are also on course to reach the last eight of the Champions League, raising the possibility of Guardiola securing a stunning treble in just his second season at the helm.

"In the league, they're running away with it. [They won a] trophy on Sunday and their football is spectacular," former Chelsea and Tottenham boss Villas-Boas told Omnisport at the Laureus Awards.

"It took one year for Guardiola to settle, but the way the team is playing now is fantastic.

"Not only that, but it's the consistency in terms of results. This consistency means that they go into every game with a lot of confidence.

"With such young players and quality players, they are really a team to look out for."

City will resume league duties on Thursday, as they go up against Arsenal in a repeat of the Wembley showpiece.

A victory at the Emirates Stadium in the rearranged fixture will push them 16 points clear of nearest rivals United with just 10 games remaining.