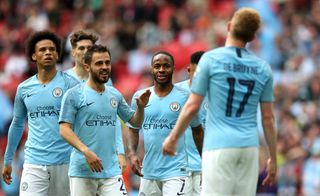 Fresh from wrapping up the Premier League at the end of a rip-roaring title duel with Liverpool, City became the first men’s team in English football history to win all three domestic major honours.

Guardiola’s side emphatically brought the curtain down on an exceptional season at Wembley, where Sterling’s treble complemented David Silva, Kevin De Bruyne and Gabriel Jesus goals in a 6-0 win against Watford.

It was a record-equalling FA Cup final victory and saw City add this trophy to their league and Carabao Cup crowns.

Some would even count their Community Shield towards their tally, but by whatever measure this has been a wonderful season for the blue half of Manchester.

Yes, the Champions League still eludes them and the spectre of a potential ban in that competition looms large, but the feeling was unbridled joy as City lifted the FA Cup and celebrated one of the greatest days in the club’s history.

Watford hoped this would be their day as they looked for their first major trophy on their second FA Cup final appearance, but Javi Gracia’s men faded after some promising early moments.

David Silva opened the scoring and settled the nerves when ending a 27-game run without a goal, before Bernardo Silva’s beautiful pass found Jesus and Sterling finished on the goal line.

Watford overcame a two-goal deficit in stunning fashion in the semi-finals, but City are a different beast. And a relentless one at that.

Time for the trophy lift. Start the party, @ManCity! 🎊https://t.co/pMsyeREwEu— The Emirates FA Cup (@EmiratesFACup) May 18, 2019

City kept their foot on the Hornets’ throat. Substitute De Bruyne and Jesus netted before Sterling completed his hat-trick as Guardiola overcame compatriot Gracia in the 138th FA Cup final.

Few could have foreseen this result given the way Watford started once the fog from the pre-match pyrotechnics cleared.

Gracia’s team looked well-drilled and were playing to their strengths, which could have brought an 11th-minute opener after winning possession from a City corner.

Abdoulaye Doucoure burst down the right flank and fired forward to semi-final hero Gerard Deulofeu. His ball found Roberto Pereyra, only for Ederson to rush out to the edge of the box and save.

Watford captain Troy Deeney was proving an unsettling presence and he was as incensed as anyone when Doucoure’s shot hit Vincent Kompany’s arm, but no penalty was awarded.

The yellow wall’s frustration soon turned to deflation as City showed they had the determination to match their skill as David Silva and Sterling – neither the most imposing physical presence – won back-to-back aerial challenges.

The latter’s header put the former behind the Watford backline, with the Spaniard’s low shot taking a touch off compatriot Kiko Femenia before nestling in the far corner.

Screams for offside fell on deaf ears as Craig Cathcart had played David Silva onside – and soon it was Bernardo Silva making a key contribution.

Having defended diligently after the opening goal, Watford were undone by an exceptional, side-splitting ball by the Portuguese. Jesus gleefully met it at the far post and steered it towards the empty goal, with Sterling making sure on the line.

It was a gut punch that quietened Watford’s superb support, with Heurelho Gomes – playing what could prove his last match in football – denying Riyad Mahrez and Jesus either side of the break.

City kept their foot on the gas as they went for a third goal, which their enviable strength in depth soon brought.

While De Bruyne will have been irked to end a disrupted campaign on the bench, he was able to celebrate minutes after coming on when found by Jesus before showing composure to turn away from Gomes and direct home.

A superb run through the middle from Jesus was key to that goal, just as it was for City’s fourth – but this time the Brazilian took the credit himself by slotting past Gomes in front of the City hordes.

It did not stop there.

Guardiola’s side showed no mercy and Sterling was soon celebrating a hat-trick, turning in a Bernardo Silva cross before converting three minutes from time after initially seeing a shot tipped onto the post.