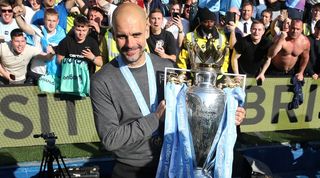 The Citizens were handed 40 after clinching the title last season – one for boss Pep Guardiola and the rest for players who featured in at least five games, as well as other players and officials at the club’s discretion.

However, the Daily Mail reports that City have been rejected by the Premier League after asking for extra medals.

The League believes the number they handed out was sufficient, but Guardiola has previously described the five-match minimum rule as “ridiculous”, as he believes youth players who trained regularly with the squad are deserving of recognition.

The report says that City handed out around 500 medals to non-playing staff to thank them for their contributions over the course of the season.

The current champions have started the 2019/20 with one win and a draw, after they were held 2-2 by Tottenham at the Etihad Stadium on Saturday evening.