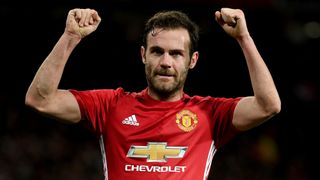 An eye-catching Juan Mata goal secured Manchester United an underwhelming 1-0 win over Rostov to book their passage to the last eight of the Europa League.

Jose Mourinho's side – held 1-1 in Russia – were wasteful in front of goal for much of the match at Old Trafford and looked to be heading for a goalless stalemate before Mata prodded home 20 minutes from time at the end of a well-worked move from the hosts.

United were dominant throughout, with Rostov offering little attacking threat and generally relying on defensive stubbornness and good fortune – the post coming to their rescue twice in the first half to keep Zlatan Ibrahimovic at bay.

The home side suffered the blow of losing Paul Pogba – who enjoyed a strong first half – to a suspected hamstring injury just after the break and their hold on the midfield suffered slightly as a result.

But Mata finished off a fine United move to punish a Rostov error and that goal proved to be enough, though Sergio Romero was forced into a superb late stop to prevent the match going into extra time.

United made an early statement of intent, as Nikita Medvedev was forced to parry Marcos Rojo's header and then Ibrahimovic struck the post from a tight angle as he pounced on the rebound.

Ibrahimovic made a nuisance of himself again 15 minutes in, but he fired over when trying to beat Medvedev from an acute angle for a second time instead of teeing up Henrikh Mkhitaryan after racing on to Mata's pinpoint pass.

Mkhitaryan's involvement steadily became more significant and he was denied a penalty just before the half-hour mark following a blatant push in the back by Medvedev.

The Armenian almost got his revenge shortly after, but he clipped a delicate effort agonisingly wide of the left-hand upright after another fine Mata pass.

Ibrahimovic was then kept out by the woodwork again 11 minutes before the break, drilling a fierce effort onto the right-hand post after cleverly sidestepping Miha Mevlja in the area.

Pogba's forced replacement two minutes into the second period left United with a creative void in midfield, as his replacement – Marouane Fellaini – provided more of a defensive presence.

And Rostov tested Romero for the first time shortly after – Sardar Azmoun seeing a curling 20-yard effort pushed away by the Argentinian.

That chance marked the switch to a more purposeful set-up from the away side, but that only served to give United more space to attack.

And they took full advantage 20 minutes from time, as United pounced on an error and quickly broke forward, with Mkhitaryan ultimately sending a low cross into the box which Ibrahimovic flicked on to Mata for an easy finish.

Rostov did go close to levelling and taking the match to extra time, but Romero dived down to his right to tip substitute Aleksandr Bukharov's header around the post in acrobatic fashion and United ultimately clinched their spot in the quarter-finals.