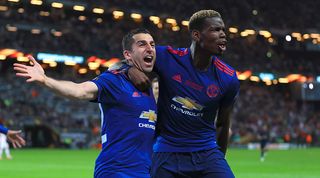 Manchester United's class and experience told on a difficult night at the Friends Arena for Peter Bosz's bright-eyed Ajax, as the Premier League giants controlled the match from kick-off and duly blunted the Dutch outfit.

Mourinho – who also lifted the trophy with Porto in 2003 – has now won 12 of his 14 finals as a manager, and can breathe a sigh of relief having pinned his hopes on Europe's secondary competition as the only way to qualify for next year's Champions League group stage.

United were heavy favourites going into the game, and in raw context it wasn't too difficult to understand why: in the last three seasons they have spent £455 million on new players; Ajax, in contrast, have shelled out £379m since the Second World War.

That is, of course, largely down to their famed reputation for producing in-house talent – a legacy that was proudly on show in Sweden's capital. The average age of Bosz's starting XI was just 22 years and 282 days, and included 17-year-old centre-back Matthijs de Ligt, two 20-year-olds alongside him in defence and 19-year-old striker Kasper Dolberg.

Mourinho made 10 changes from the young side that saw off Crystal Palace on the final day of the Premier League season: Sergio Romero started in goal as confirmed by his manager pre-match, while Chris Smalling and Juan Mata were more surprising choices ahead of Phil Jones and Jesse Lingard.

United were not vintage in the first half, but started the game well and could have been ahead after 10 minutes when Mata flashed a ball across goal that Marouane Fellaini couldn't quite meet with his head.

Ajax hit back through on-loan Chelsea man Bertrand Traore, but within a few minutes found themselves behind at the very stage that they were on top. Jairo Riedewald's throw-in deep inside his own half was poor, gifting possession to Mata. The move that teed up Pogba in space was slick, but the Frenchman needed a huge slice of luck – otherwise known as a huge deflection off Davinson Sanchez – to see his strike beat goalkeeper Andre Onana.

Give Mourinho a lead and he will protect it better than most – this, after all, is the boss who once famously bragged that he could win any match 1-0. After the opener, United sat back and allowed Ajax possession – just before the half-hour mark Bosz's team had boasted just shy of 70% possession – yet Romero was scarcely tested.

There was just one shot in the final 20 minutes of the first half, in a period that had not been pretty.

Not that Mourinho will have cared, and not least when United doubled their lead just two minutes into the second period.

Armenian midfielder Mkhitaryan – booked in the first half, and a candidate to be replaced at the break – reacted quickest from a Smalling knockdown to hook a clever effort beyond Onana. The former Borussia Dortmund man has surely been United's best player in the competition this season, this being his sixth goal in the tournament.

With United truly in control by this point, they merely proceeded to do what all good Mourinho sides do in such situations, and comfortably saw out the rest of an ugly match to claim their second trophy of the campaign.

This has been a testing season for Mourinho's side, but Champions League qualification and two trinkets make the Portuguese a winner yet again.