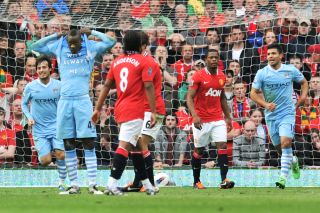 The first time United had leaked six goals at Old Trafford since 1930, this was their heaviest home defeat for 56 years. Mario Balotelli (2), Edin Dzeko (2), Sergio Aguero and David Silva were on target as City kick-started their title drive – with Darren Fletcher’s 81st-minute reply all the hosts could muster.

Chelsea ended United’s 29-game unbeaten run in style. Gus Poyet was on the scoresheet twice including a strike after just 27 seconds, Chris Sutton made it 2-0 and Jody Morris rounded off the scoring – after a Henning Berg own goal and Nicky Butt red card on a dismal afternoon for United.

Just a week after losing 5-0 to Newcastle, United were sunk 6-3 on the south coast. Egil Ostenstad fired a hat-trick, Eyal Berkovic scored twice and Matt Le Tissier chipped Schmeichel. To add to United’s woes, Roy Keane was sent off.

Jose Mourinho endured a torrid return to Stamford Bridge as Chelsea hammered United. Pedro and Gary Cahill were on target in the first half, before Eden Hazard and N’Golo Kante broke through after the break.

Ole Gunnar Solskjaer had a humbling afternoon at Goodison Park as Everton well and truly ended his honeymoon period. Everton were 2-0 ahead at the break through Richarlison and Gylfi Sigurdsson and Lucas Digne and Theo Walcott doubled the lead.