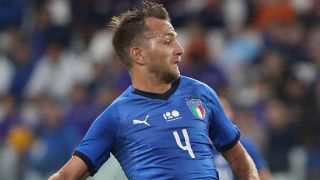 The hosts were worthy of the 1-0 lead afforded to them by Simone Zaza's goal in Turin, having wasted a series of earlier openings in a clash between two nations who missed out on World Cup qualification.

But, just two minutes after breaking the deadlock, the Azzurri were reduced to 10 men when Criscito halted a goal-bound Ryan Babel by foul means.

It gave Ronald Koeman's previously lacklustre side impetus to press for a leveller that arrived two minutes from time, courtesy of Nathan Ake's header.

Despite questioning whether Criscito should have seen red, Mancini - whose oversaw a 3-1 defeat to France on Friday - was evidently frustrated by the Zenit stalwart's actions.

The drew in . After taking the lead through , the side went down to ten men and the Oranje found a late goal through Ake. June 4, 2018

"It was a friendly, I don't know if that was really a red card," he told Rai Sport.

"It was nonetheless an enormously naive error. Playing down to 10 men for 20 minutes was tough, as we were already feeling tired.

"It's difficult after 10 days to develop really complex tactical situations, but we saw some good things against France and again today.

"We have to get them playing and gaining experience, otherwise they never will play, so that's what the friendlies are for.

"It was important that the lads put the effort in, which wasn't easy after a long and tiring campaign. They did that, they've got the right mentality and now we go towards August with optimism.

"We're glad the fans have so much enthusiasm for a young side."