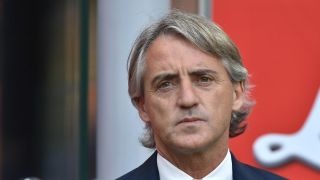 Inter coach Roberto Mancini has said he is not concerned with his team's 0-0 draw against Austrian side WSG Wattens.

The friendly was Inter's first of their pre-season, but despite fielding a team that included the likes of Mauro Icardi, Stevan Jovetic and Geoffrey Kondogbia - who all started the game – the Serie A side could not find a way through the stubborn Wattens defence.

Mancini changed all 11 players at half-time, but his second-string outfit had no luck either.

But Mancini said he was not bothered by the result or his side's failure to score.

"The lads are all too heavy-legged and I asked them not to push too hard, because there was too big a risk they could get hurt today," Mancini told the club's in-house television channel.

"The first few days of pre-season are tough and that's going to take its toll on fitness levels. The fans are always close to the team and that is very important."