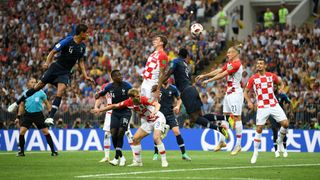 Mario Mandzukic has written himself into history in disastrous fashion by becoming the first player to score an own goal in a World Cup final.

The extra-time hero of Croatia's semi-final win over England turned villain when he flicked Antoine Griezmann's free-kick into his own net in the 18th minute of the 2018 decider at the Luzhniki Stadium.

He was later joined in breaking new ground by Atletico Madrid man Griezmann, who converted the maiden penalty to be awarded by VAR in a final.

That came courtesy of a close-range handball on Ivan Perisic, the Inter man having earlier pulled Croatia level amid an action-packed first half.

1 - Mario Mandzukic is the first ever player to score an own goal in a World Cup final. Misfortune.July 15, 2018