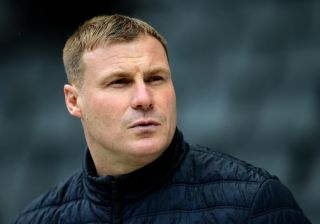 Referee Charles Breakspear was at the centre of controversy in the 1-1 Rodney Parade draw, CJ Hamilton’s early opener for Mansfield cancelled out by Padraig Amond seven minutes from time.

The Irishman scored from the rebound after his spot-kick had been saved by Conrad Logan, with Mansfield unhappy over the penalty award as the goalkeeper fell at the feet of County substitute Ade Azeez.

Flitcroft also felt Newport defender Mark O’Brien should have been sent off for denying Tyler Walker a goalscoring opportunity in the fifth minute, with Breakspear brandishing a yellow card.

“There are some big decisions he (Breakspear) has got wrong and it’s a travesty because we’re professionals,” Flitcroft said.

“You work really hard for these games and the fans travelled a long way and I feel we’ve been let down.

“You just want the best officials to referee these games, we’re not asking for a lot.

“There are plenty of great officials who will be on VAR duty this weekend they could have used.”

Flitcroft claimed League Two had been let down by the appointment of Surrey official Breakspear.

“I’m just not sure how much they respect the League Two play-offs,” Flitcroft said.

“We’ve been positioned on a Thursday, which gave the Football League an opportunity to give us a hell of a good referee.

“There are probably 60 to 70 higher ranking referees in this country that should have refereed this game.”

Newport manager Michael Flynn said a Premier League official should have been put in charge of the tie.

“We’ve got goal-line technology tonight, so why not have one of the 20 full-time referees as well?” Flynn said.

“It’s the play-offs. We want to keep getting better, so why not have a Premier League referee here?”

But Flynn was adamant that the yellow card for O’Brien was the correct decision.

“The referee has got that bang on, because it’s run straight through to the keeper,” Flynn said of O’Brien’s challenge on Walker.

“Our boys are saying it wasn’t even a foul. He went down very easily.”

Mansfield finished the regular season three places and five points better off than Newport and will be considered favourites to progress from Sunday’s home leg and reach the Wembley final.

Flynn said: “All the pressure is on them. We finished the strongest.

“In the second half, I thought there was only one team going to score. We had five or six good opportunities.

“We’ll pick a team to go there and cause them problems.”