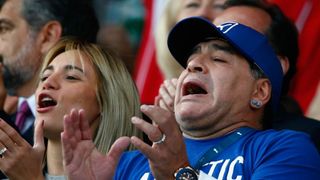 The Argentina players and coaching staff celebrated their Rugby World Cup hammering of Tonga by having an impromptu dance and sing-song with the legendary Diego Maradona on Sunday.

Nicolas Sanchez produced an outstanding display at Leicester City's King Power Stadium, chalking up 25 points in a resounding 45-16 triumph to become the leading scorer in the tournament.

The fly-half scored a second-half try as well as booting four penalties and as many conversions as the Pumas moved to the brink of the quarter-finals.

Daniel Hourcade's side are now four points clear of Tonga with one game against Pool A minnows Namibia to come back at Leicester next Sunday, with Tonga facing a New Zealand side who have already qualified.

Football great Maradona put the icing on the cake when he went into the Argentina dressing room after watching their victory, much to the delight of Hourcade.

The Argentina coach said: "For me Maradona was always the best player in history and it was very nice for him to come and see us, he took number nine, 10 and two t-shirts.

"He gave us a speech and he said the whole of Argentina was dreaming with us and everyone was supporting us and he wanted to be here supporting us.

"We danced, we did the Rodrigo song [about Maradona]. It was a beautiful surprise he was here."

Maradona used to put on a show in the number 10 shirt for Argentina and he saw Sanchez star at 10 for the Pumas.

Hourcade was not surprised to see the talented fly-half take centre stage in what was such a crucial match.

He added: "With regards to Diego I guess it was special for Nico to have him there. In terms of the way Nico is playing, we all know how he plays, he's a great player."

Hourcade stressed there was plenty of room for improvement from his side, who fell behind to an early try from Kurt Morath and conceded another to Soane Tonga'uiha just before half-time.

"We were not very happy, as our defence was not as how it is supposed to be. It was a physical game and we corrected our mistakes in the second half," he added.

"We need to improve on defence, our attack was alright but there were problems as well. We will look at things and see why they happened."