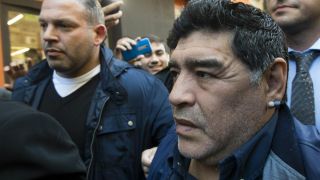 Diego Maradona was left furious after a meeting with FIFA's normalisation committee in place for the Argentine Football Federation (AFA), with the football great claiming talks "went backwards".

Maradona arrived at the AFA headquarters on Wednesday to meet with Primo Corvaro and Montserrat Gimenez - who are in charge of the committee - to talk about the recent controversies surrounding Argentine football.

The 1986 World Cup winner hoped to sort out the crisis surrounding the Argentina Olympic team, after doubts were lingering over their participation at the upcoming Games in Rio de Janeiro, before announcing their finalised 18-man squad later in the day.

However, after meeting with Corvaro and Gimenez, Maradona left the AFA headquarters on Wednesday less than impressed.

"The meeting went backwards," Maradona told reporters. "I do not agree with a lot of things they want to do.

"They want to make a fresh start and I don't want that yet, I want an audit of the ex [AFA] president [Julio Grondona], and then we start new.

"We continue to be in the same mafia as under Grondona. There are even paintings of Grondona there.

"I am going to speak with [FIFA president] Gianni Infantino and if this is what he proposes to me, I will not accept it."

Maradona had hoped to be part of the coaching staff for the Rio Olympics, after head coach Gerardo Martino resigned from his role on Tuesday.

But it appears Maradona was denied the possibility to be assistant to newly-appointed Under-23 coach Julio Olarticoechea in Rio, saying: "I am angry. It hurts me in my soul."

Maradona also addressed the issue of the Super League, with bigger clubs in Argentina keen to break away from the AFA to form a new competition for larger broadcasting revenues.

"Don't talk to me about the championship or Super League," he said. "Leave me a clean AFA. I don't agree with presidents that want it all for them.

"The big teams are in great shape, but what about the others? They want a Super League of 30 teams. I am very annoyed."