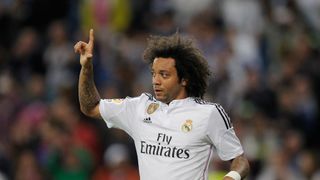 Real Madrid full-back Marcelo has signed a new contract, keeping him at the club until 2020.

The Brazil international came through the youth ranks at Fluminese in his home land, before moving to Real in January 2007.

Marcelo has proved a fans' favourite at the Santiago Bernabeu due to his willingness to get forward from the back.

The 27-year-old has won the Liga title on three occasions during his time in the Spanish capital, the last of which came in 2012 under the leadership of Jose Mourinho.

His greatest achievement in a Real shirt came in the 2013-14 season, though, when - led by former coach Carlo Ancelotti - Marcelo was a part of the side that beat city rivals Atletico Madrid to clinch the UEFA Champions League, Real's 10th triumph in Europe's premier competition.