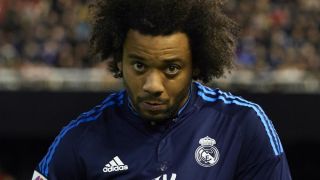 Real Madrid right-back Marcelo refused to get drawn into speculation about Rafael Benitez's future, saying the players must keep winning for the head coach.

Madrid were pegged back twice in a 2-2 draw against Valencia on Sunday, finishing the game with 10-men after Mateo Kovacic was shown a straight red card.

"As a captain, I say we are with the coach but the players do not make the decisions," Marcelo said.

"We will keep showing character and keep giving this image.

"I really don't know. That question you have to ask the president.

"We will just try to keep winning."

However, Marcelo refused to make any excuses for the dropped points against Valencia, with Madrid failing to capitalise on Barcelona's draw against Espanyol on Saturday.

"This league is the most competitive in the world," he said. "We have to change and to change we must win games.

"We tried to win knowing we have to make the most of the opportunities, but I won't put any excuses.

"People want to see Madrid win and we will always try. We need to improve our results."

Madrid's next test in the league is at home against Deportivo La Coruna on Saturday.