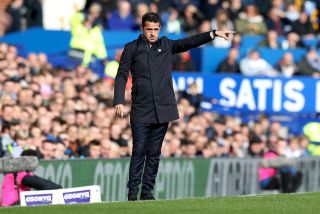 Marco Silva wants last Saturday’s win over West Ham to be a “turning point” in Everton’s season as they look to move up the Premier League table.

Silva’s side head to Brighton on Saturday still seeking their first away win of the season and hoping to build on last weekend’s 2-0 victory at Goodison Park, which lifted some of the pressure off Silva’s shoulders with his team hovering just above the relegation zone.

“We performed so well, we showed that quality, that pride in ourselves to play the level we played,” Silva said.

“Of course we have to build from that. It was a turning point for us. It does not mean we will win all the matches from now until the end of the season of course but we have to play in that way, always to win, always with that pride in ourselves.

“We have to play with that pace, with that desire to win the game, and play with freedom like we did even if that pressure was there.”

Silva is still among the bookmakers’ favourites to be the next Premier League manager to lose his job given the lack of return so far on some considerable investment in the summer, but he said victory over the Hammers had transformed the mood around the club.

“The mood is completely different, like you would expect,” he said. “Before the West Ham match we had a really tough month. Before the first international break we were sixth in the table and then it was not so good for us and the mood is not the best when you are not achieving the results.

“The mood was not good, but then we showed on the pitch our quality, our pride, our desire to change the results and the performances as well.”

The victory has given Silva plenty of “good headaches” as it was achieved despite the absences of Seamus Coleman, Fabian Delph and Morgan Schneiderlin, while Gylfi Sigurdsson scored his late goal after coming off the bench.

All those players are back in contention on Saturday, but Silva is waiting to see if Yerry Mina, who put in a commanding performance at the back, will be fit in time as he battles a knee injury.

At the moment, that is looking unlikely.

“It is not so good news,” Silva said. “Of course we have more days to prepare for the game so let’s see how it will be tomorrow and of course on the match day as well.

“It is not a serious injury but it is something where we didn’t put Yerry Mina ready to work with the team in a full session.”

Should Mina miss out, Mason Holgate, who replaced him in the 89th minute last weekend, could be in line for his first Premier League start of the season.

“He is ready, prepared,” Silva said. “He showed to me every single day he is working hard to achieve and to get his chance.

“He already did in two Carabao Cup matches. He did well and performed well and in the game against Sheffield Wednesday he had a very good game. I am sure if he gets his chance he will be ready to perform to his level.”