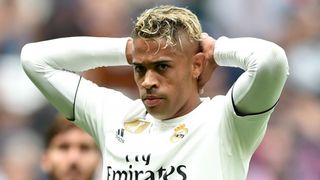 Mariano Diaz has thanked Julen Lopetegui for giving him a second chance at Real Madrid following a swift end to the beleaguered coach's ill-fated tenure.

The ex-Spain boss lasted 14 matches in total, with the failure to adequately replace Cristiano Ronaldo contributing to his downfall.

Mariano, 25, was the most senior attacker recruited in the wake of Ronaldo's departure and expressed appreciation to the man who brought him back from Lyon, where he spent a single season.

"I will always be grateful to Julen Lopetegui, one of the people who made it possible for me to return home," the striker wrote on Twitter.

"I wish him the best for the future.

"Now we only have to fight more than ever to get out of this situation."

Mariano's only goal since returning to Spain came in the 3-0 win over Roma in the Champions League that will be remembered as one of precious few Lopetegui highlights.

Ex-Madrid midfielder Santiago Solari has taken charge of the European champions on an interim basis.