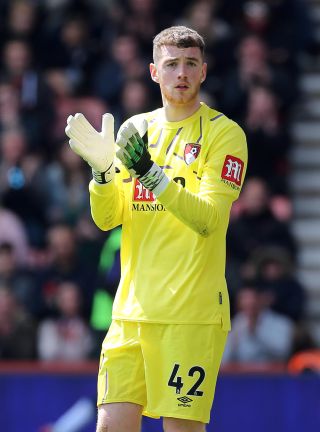 Bournemouth’s Mark Travers has targeted starting next season as the club’s first-choice goalkeeper — but he could yet go out on loan to gain more first-team experience.

The teenager excelled on his Premier League debut when he kept a clean sheet in their 1-0 victory over Tottenham, but endured a more difficult afternoon on Sunday when Crystal Palace won 5-3 at Selhurst Park.

There remains uncertainty about Bournemouth’s goalkeeping hierarchy given the inconsistency of Asmir Begovic and Artur Boruc, contributing to the 19-year-old Travers being given his chance, and the Irishman hopes that a conversation with Eddie Howe will confirm that further chances will follow.

Travers will planning to speak to Bournemouth’s manager when the first-team squad return for pre-season.

“I’ll do that in the off-season. We’ll have a bit of time off and it’s go from there, really,” Travers said.

“I’ve felt comfortable and confident out on the pitch in the last two Premier League games. It’s something I know I can do. Maybe I’ll get a bit of loan experience; I’ll just have to wait and see.

“But if the manager decides to give me a few more games I’m ready to play. I just want to keep going. I want to play more games.

“I still need to reflect on the season and take from that into the off-season. I need to come in pre-season, give 100 per cent, then it’s down to the manager.”

Sunday’s fixture represented Julian Speroni’s last as a Palace goalkeeper after 15 years at the club.

He was left out despite previous confirmation of his departure, a decision Speroni had contributed to, and he told the club’s official website: “It’s hard to express how I’m feeling right now.

“It’s been 15 years, and the bond that we’ve built with all the fans here is just incredible. I will never forget it. It’s something that will stay with me forever.

“The whole time that I’ve spent at this unbelievable football club is the highlight.”