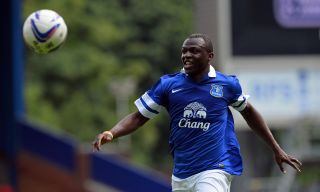 The 29-year-old, who followed the Spanish boss from Wigan Athletic at the start of the new campaign, is yet to score and has made just the one start in the League Cup.

He has also seen competition for places increase following the arrival Romelu Lukaku on loan from Chelsea, with the 20-year-old having netted four times in as many league appearances.

However, Martinez still believes Kone has a part to play in the side and feels he will soon be back to his best.

"We have to remember that Arouna has had a few niggles that have stopped him from being himself," he told EvertonTV.

"I thought that in the 20 minutes (against Hull) he created two outstanding opportunities and he was a very important link piece in our attacking play.

"I thought he looked sharp, looked lively and technically good in everything he did. If he carries on creating those chances everyone will see the type of player that Arouna can be."

The striker will hope to get another chance to impress when Everton face Aston Villa on Saturday.