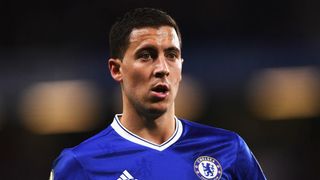 Roberto Martinez does not expect a row with Chelsea, despite calling up Eden Hazard with the attacker still waiting to return to first-team action from injury.

Belgium captain Hazard has not played since fracturing his right ankle on international duty in May, and has only just made a comeback to training with the Premier League champions.

He is unlikely to play any part in Sunday's fixture against Everton before heading on international duty, but Martinez says Hazard's standing as captain was a key factor in his decision to call on the 26-year-old.

"I think the selection [of Hazard] is to see how he is," Martinez told a media conference. "It does not mean he is fully fit, we will make a decision on that on Monday.

"Eden is our captain and needs to be in our selection. He is in a good moment, he is coming back from injury with really good signs. The information we have was good enough to call him up.

"We have got a very good relationship with Chelsea, everything has been open and honest.

"We need Eden Hazard as a footballer, but as a human being as well, there has been no conflict with anyone.

"It is important we started with Eden in the squad."

This is our squad list for Gibraltar and Greece! August 25, 2017

Radja Nainggolan's omission has raised eyebrows. The Roma midfielder has played only four times for his country under Martinez and misses out altogether this time.

In his stead, Steven Defour is offered a recall for the first time since November 2016, while Jordan Lukaku's reward for a fine start to the season at Lazio is his first call-up in 10 months.

Belgium host Gibraltar on Thursday, before travelling to Greece three days later as they look to maintain their unbeaten start in Group H.