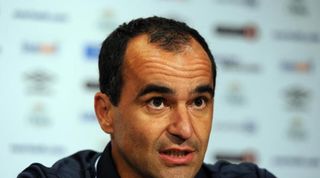 The hosts were 2-0 down inside three minutes at Goodison Park on Saturday and, despite twice reducing the deficit to one goal, they remain winless in this season's Premier League.

Everton have now conceded 10 goals in three games, during which time they have taken two points, and Martinez is concerned about apparent mental frailties.

"We started the game very, very uncharacteristically," the Spanish manager said. "It seemed we didn't have that defensive intensity, that focus you have to have, especially with a team like Chelsea.

"And from then you're chasing the game. But we were too soft with our defending, every time the ball was around our 18-yard box we had a real fear that the ball was going to end up in our net.

"Now we've got 10 goals conceded in three games and that is not like us at all. We kept 15 clean sheets last campaign.

"Our attacking play was phenomenal; we need to bring that intensity and that feeling to our defensive play."

Everton travel to West Brom after the international break, with their UEFA Europa League campaign beginning at home to Wolfsburg on September 18.