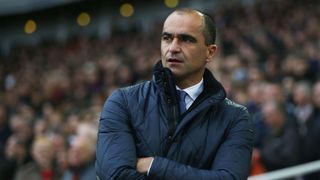 Along with Gerard Deulofeu and John Stones, Barkley was one of the standout players for Martinez's side on Saturday, and he was singled out for praise by his manager.

"We all agree that he's a special talent and his young career is quite exciting," said Martinez.

"What I love about Ross is his passion for the game. In the new generation of footballers it's very rare to see players like Ross Barkley or John Stones – they are in love with playing the game.

"They've got that passion of just coming in and training and being the best that they can, and clearly that reflects in what they do in the games."

Romelu Lukaku also netted a brace as Everton followed up a 6-2 drubbing of Sunderland in their last home game with another romp against the Premier League's bottom club.

Lukaku, who has scored nine goals this season, became only the fifth player in Premier League history to score 50 goals before the age of 23, after Wayne Rooney, Michael Owen, Cristiano Ronaldo and Robbie Fowler.

Martinez said: "We keep seeing a reminder of what a special talent Romelu is.

"It's a very impressive landmark, and the maturity he has shown this season is even more impressive.

"Ten goals from open play from the last two games at Goodison is a very, very good return, but I thought the difference was off the ball, and the way we defended as a team, was very impressive and worthy of the clean sheet."