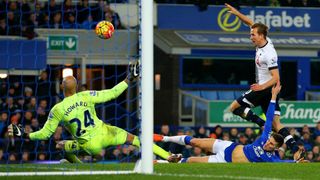 Roberto Martinez was delighted with an improved defensive display from Everton in Sunday's 1-1 Premier League draw with Tottenham.

The visitors dominated the first half at Goodison Park, but were forced to come from behind to earn a share of the spoils, with Dele Alli cancelling out Aaron Lennon's opener against his former club.

Everton were much more of a threat in the second half and could have taken all three points, only to see Hugo Lloris make an excellent late save from Muhamed Besic's strike.

Martinez's side had conceded seven goals in their previous two home league games, but the Spaniard was thrilled with the defending on show against Spurs.

"We've been a little bit lightweight in the way we've defended our box, but I think today was an incredible change in the way we defended. It was a really good platform for our performance," he told Sky Sports.

"They had a lot of the ball, but never really found their key players – [Erik] Lamela, Harry Kane, they didn't have much play and I think that's down to our defensive organisation.

"In the second half we grew into it. We changed the shape a little bit, brought in some different personnel and it gave us a real lift.

"It was a terrific game of football, but with a little bit more focus in that final pass we could've taken advantage of a couple of opportunities we had."

Martinez revealed Everton have begun to lay the groundwork for some possible January signings, but says there is no desperation to bolster his squad.

"We'll always look to take advantage of the window, that's always our way of working and we've been doing some work beforehand identifying possible players," he added.

"But as you could see today, we are ready to have a real strong second half of the season."

The draw – a ninth of the season in the top flight for both sides – leaves Everton 11th in the table.