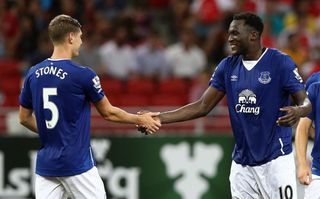 Everton might be in the midst of a 21-year wait for silverware, but manager Roberto Martinez said his priority is Champions League qualification.

Martinez believes that qualifying for the world's biggest continental club competition will prove more important in convincing young stars like John Stones and Romelu Lukaku to stay at Goodison Park.

Everton take on Manchester City in the first leg of the League Cup semi-final on Wednesday.

"I don’t think winning a cup will keep the young players, I think qualifying for the Champions League could help to keep young players," Martinez said.

"The reality is that we have taken a very different approach to what we are as a team than we took at this club three years ago. Three years ago it was a very experienced team who knew how to win games but had some sort of ceiling.

"Now we have gone very young with immense potential to go beyond that ceiling, and there has been investment in that potential so we will get the rewards from it."

Martinez said silverware was still a priority, but felt it was important to prioritise keeping the club's best young talent in order to keep Everton on track for greater glory in the future.

"I wouldn’t say I don’t want to win silverware, because that is what this club is about and our aim is to have that drive and ambition to do that, but the aim is to get into the top four and that is what we have set out to achieve," the Spaniard said.

"How long that is going to take I don’t know, but I don’t think winning a cup will help us to keep players. What will make it easier in the modern game is to fight for the top four positions in the league."