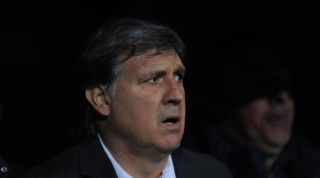 Martino's men came from behind to claim a 2-1 home win over Athletic Bilbao on Sunday, Pedro and Lionel Messi finding the net as they partially atoned for the midweek Copa del Rey final loss to arch-rivals Real Madrid.

The win kept Barca within four points of La Liga leaders Atletico Madrid and ended a run of three consecutive defeats following their UEFA Champions League exit to Atletico and a shock reverse to Granada.

Barca are in danger of finishing the season without a major trophy for the first time since 2007-08, and Martino will be disappointed should he end his maiden campaign at Camp Nou ends empty handed.

"The least we can do is engage with the hope of winning," said the Argentinian. "Now we need Atletico and Real Madrid to fail.

"If we win the league it will make a difference but I don't think it will change my opinion. I am picky and so I raised the point that Barca usually win and after I've arrived they don’t win, and that I feel responsible."

Atletico host Chelsea in the Champions League last four on Tuesday as they aim to claim the double.

Diego Simeone's men then visit Valencia in the league on Sunday, but Martino brushed off suggestions that the capital club could be affected by tiredness from their European exploits.

"If they continue they'll (Atletico) be more tired," Martino added. "But I don't think physical fatigue is that important."