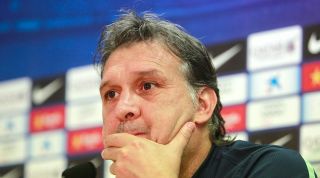 The La Liga leaders moved a point clear at the top despite the 0-0 draw at Osasuna, with Atletico Madrid beaten at Espanyol.

Martino was pleased with his team's performance ahead of a Champions League trip to Milan and a meeting with Real Madrid in the El Clasico.

"I would be worried if I had seen a regression on the performance of the team," he told reporters.

"But as I haven't seen that, I think that we drew because it had to be like that, not because we stepped back from our way of playing thinking of the important matches ahead against Milan and later El Clasico.

"I'm not disappointed, although I still think we should have won, because I am confident with team's performance."

Martino felt Barca deserved more than a point, but rued their failure to make the final pass in the attacking third.

"In the first half I think we made mistakes in the last pass," he said.

"Pedro tried, Neymar tried, Cesc (Fabregas) tried, but when we were not reaching by centimetres, the decision of the pass was not the best or the way of carrying the ball wasn't the perfect one.

"And the best chances came from Martin's (Montoya) side, he deepened very well using Pedro's support, but maybe he lacked a bit more precision when finishing."

Martino also complained to officials for what he perceived to be persistent fouling of Brazilian star Neymar.

"I have seen in other matches the hits he (Neymar) receives after releasing the ball, when the referee continues with the game," he said.

"There have been two or three situations like that during the match. Like the last one where a player from Osasuna was booked."