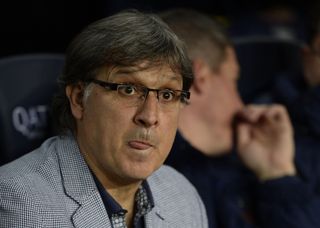 Although Barca were not at their best as they were frustrated by Atletico on Saturday, the point from a 0-0 draw ensured that they retained top spot by virtue of goal difference.

Atletico had the best chance of the game, but Diego Costa turned the ball wide from close range in the 28th minute, while Lionel Messi went close for Barca on several occasions after being introduced as a half-time substitute.

The stalemate means that Real Madrid can close to within three points of the pair if they beat Espanyol on Sunday, but despite bemoaning a missed chance to record another victory, Martino was still happy with his side's efforts.

"We played against the other team leading La Liga and a team who hasn't conceded any point at their stadium. I think the point is good," Martino said.

"Although we are not satisfied because we wanted to win the match, we don't have anything to regret.

"We tried to fight when we could and we tried to play the match when we had to."

Barcelona started with both Messi and Neymar on the bench, with the pair recovering from hamstring and gastro problems respectively.

Martino conceded that neither was fit to start, and that he had been forced to introduce Messi earlier than he would have liked.

"(Neymar and Messi) weren't fit enough to start the match," he added.

"It's true we had thought to put them on the field around the first 15 or 20 minutes in the second half, but during the match, Andres Iniesta had some problem on his knee and we decided to swap him for Messi."

The Barcelona coach also said that he does not read too much into leading the league at the halfway point of the season.

He continued: "I don't care about being the 'winter' champion. Who cares about the winter champion?"

"I would rather be the summer champions."