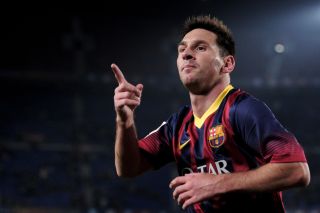 The two sides meet in a top-of-the-table encounter this weekend, with both sitting level on 49 points at La Liga's summit.

However, despite Messi scoring two goals in Wednesday's Copa del Rey win over Getafe, Martino would not be drawn on whether his star man was ready to command a starting berth having recently returned from a hamstring problem.

"Leo Messi is looking good," said Martino. "He had a brilliant half hour against Getafe. It's true that he's coming off a long period of injury and we have to assess him.

"We have to decide if he's ready to play a full 90 minutes in a match of this kind.

"I think he's tremendously focused on what's happening here at Barca and he's developing after his injury and that's quite normal.

"Now it's just a question of whether we think he's ready to be on the bench for 30-35 minutes and then come on, or play a full 90 minutes.

"We'll speak to him to see how he's feeling, because the fact is that when a player starts a game he wants to finish the game."

Martino did, however, confirm that Dani Alves and Neymar would be back in contention after spells on the sidelines.

"I always say the same," the Argentinian continued. "If they are in the squad for the game, they have a chance of playing in the game.

"Dani was a little ill. He had flu when he came back from the break. Neymar was in squad for Getafe game but he was indisposed and he couldn't play but has been training well the last couple of days."

This will be the first meeting between Barca and Atletico in the league this season, but they did meet in the Supercopa de Espana in August, when Barca won on away goals.

"We've had a good look at what happened in the Super Cup," added Martino. "It could be a similar game to what we saw then, but it could be a more open game.

"We're very much better than we were five months ago.

"I think Atletico Madrid's level has never dropped. They started the season at a very high level and they've maintained that level over the last five months."