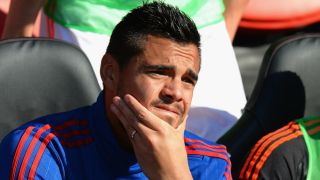 Javier Mascherano conceded the loss of goalkeeper Sergio Romero to injury was a blow to Argentina ahead of the World Cup.

The Manchester United keeper was expected to be Jorge Sampaoli's preferred option, but a knee problem has ended his hopes of playing in Russia.

Tigres UANL's Nahuel Guzman has been called up to join Willy Caballero of Chelsea and River Plate's Franco Armani as the goalkeeping options.

"Romero's injury represents a big low, not as a footballer, but as a man," said Mascherano, who will retire from international football after the tournament.

"He has been the leader of the team for 10 years.

"It is football, things happen. We must wish the best to Guzman and move forward.

"We have suffered something unexpected, but there is optimism that the coach can count on the 23 players available."

Mascherano, whose 142 caps represents a joint record with Javier Zanetti, is hoping to bow out on a high for his country.

"Often football is fickle and incomprehensible," he said. "We are clear that a World Cup is not simple, but we have a case to go to compete.

"It's clear to me it's the last chance. I hope we can live up to the competition. The most important thing is to show a competitive Argentina."

Sampaoli's side, beaten 6-1 by Spain last time out in the absence of Lionel Messi, face Iceland, Croatia and Nigeria in Group D.