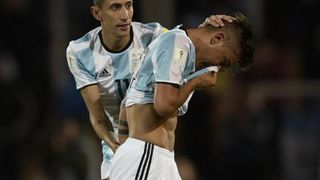 Argentina veteran Javier Mascherano told Paulo Dybala to use Lionel Messi's international debut as an example after his red card against Uruguay.

On his starting debut, Dybala was sent off just before half-time of his side's 1-0 victory in World Cup qualifying on Thursday, leaving the pitch in tears.

Similarly, Messi saw red on his international debut, sent off in a 2005 clash against Hungary at the age of 18.

Mascherano said he tried to use that to encourage Dybala to bounce back.

"I told him the same thing had happened to Messi when he started in the national team," he said.

"And look how it went afterwards."

Messi was the match-winner for Argentina, his deflected strike just before the break enough in Mendoza.

The Barcelona star had announced his international retirement immediately after the Copa America Centenario final loss in June, only to reverse that decision.

Mascherano admitted to thinking of doing likewise, saying: "Yes, I spent a lot after losing the final.

"I thought maybe not to come [back], but I started thinking what am I going to do? Will I stay in my house?"

A groin injury will see Messi miss Argentina's next qualifier – a trip to Venezuela on Tuesday.