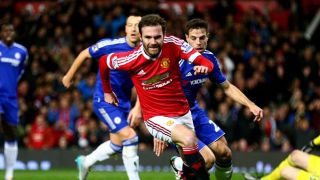 The Manchester United midfielder is himself a record signing for the club, having cost United approximately £37million when he moved from Chelsea, who spent £23.5m acquiring him from La Liga outfit Valencia.

The Spaniard is now in his sixth season in the Premier League and wants to see the likes of Lionel Messi and Neymar join him.

Mata said he would recommend England to anyone looking for a challenge.

"I enjoy everything about football in this country," he told the Mirror.

"Since the moment I came over here, more than four years ago, I have enjoyed every minute.

"I think it's a great experience to play football here and I always say the same.

"I would advise any player in the world to try to play in the Premier League for at least one season and realise how big and how massive football is in this country.

"We're talking about respect from the fans, great organisation in the league - I really like it."

The Premier League did not have one representative in the FIFPro World XI.

But Mata says while the Premier League is not famed for possession football, it was still a high-quality league to play in.

"Obviously it's true that many more teams in Spain try to play possession football, but I still really like it here," he said.

"I'm not the strongest player ever, but if you are clever enough to try to find spaces, you can still have time on the ball, you can create chances and enjoy your football, do your skills, assist and score.

"I think English football can give you that opportunity.

"Obviously, it's true that it's more physical - the football is stronger, it's quicker, it's box-to-box, and so you have to be ready, physically and mentally, for it. But I think it's good for any player."