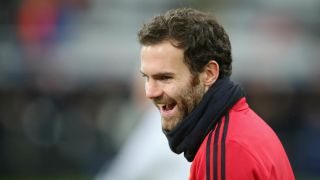 United resume match action versus Derby County on Friday and Mata is desperate to return to winning ways and move on from the Saints reverse.

"After several games without being defeated, we lost 0-1 to Southampton. And it hurts, it really does," Mata wrote in his weekly blog.

"We have to carry on. Football doesn't stop and now it's time for the FA Cup. And we want to fight for this trophy. We must get better results for the fans and I hope this beautiful competition will provide them.

"We play against Derby County, a historical team in England; they got great results especially in the seventies. But as I said, I hope we can make a good game, get through to the next round and start another good run of results.

"I assure you that our only goal is to do things much better to move up the table in the Premier League and try to lift the FA Cup. I'm sure that better moments will come sooner or later and we will enjoy them much more, aware of how tough it is to get there."