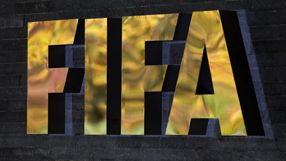 Mutschke said a convicted match-fixer had personally told him at a secret meeting that the activity was preferred by many criminals to the drugs trade.

"I met a match-fixer, a convicted match-fixer, here in Zurich next to the zoo and he told me organised crime is moving out of the drug trade and getting involved in match-fixing because of low risk and high profit," he said.

"He told me straight to my face," added Mutschke who worked for the German federal police for 33 years before joining FIFA in 2012.

"I would say there are about 50 different national leagues outside Europe which are targeted by organised crime on the betting market," he told reporters at FIFA headquarters.

Match-fixing has become a huge concern for football's authorities recently as criminal gambling rings pay players, referees or officials to manipulate matches and make enormous amounts of money by betting on the outcome.

Mutschke said that in some cases national leagues and confederations had been infiltrated to the point where referees were able to boost their careers by taking part in manipulation.

"We have seen them trying to take over an entire club and use it for match manipulation, we see it in other parts of the world," he said.

"If they manage to take over the club, they pay the salaries for the players but they are also transferring players to other clubs.

"We also see infiltration on an association level and on a confederation level.

"I know as well that referees are being lured by fixers who promise them a boost in their career when they get involved in match manipulation, because this fixer has good contacts in the federation."

Mutschke pointed out that all countries were vulnerable, not just those with a reputation for corruption. One of the most notorious cases, which led to a two-year prison sentence for Singaporean national Wilson Raj Perumal for masterminding a match-fixing scheme, was in Finland.

"There is always the question about which is the most vulnerable region in the world," said Mutschke.

"My answer is there is none. Perumal went to Finland and manipulated matches there and tried to infiltrate a club there. Finland is rated as number two on the transparency index, so it's not corrupt at all."

Mutschke said match-fixers would sometimes approach players, referees or officials out of the blue.

"You have a 50 percent chance of acceptance and what upsets me is that it demonstrates to me that they have no fear of us because nobody is reporting these approaches," he said.

On other occasions, they groom their victims over time.

"You follow the target over a certain time period, you assess his attitude, whether he is satisfied, happy, is he paid, or lacking payment from the club, or is he betting."

Sometimes, they even managed to get access to the players tunnel.