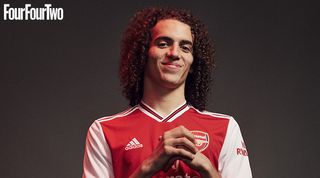 The 20-year-old Frenchman enjoyed an impressive debut season at the Emirates Stadium after joining from Ligue 2 side Lorient last summer, playing 36 matches across all competitions and helping Unai Emery’s side reach the Europa League final.

And in a light-hearted chat with FourFourTwo – part of a ‘23 reasons why it’s still good to be a Gooner’ feature in our August 2019 issue, out now – the frizzy-haired youngster believes his trademark mop is the finest in England’s top flight.

“I’ve had long hair since I was young,” he told FFT. “I have the same hair as my younger brother and my mother, although not my dad – he’s not got much now, so I hope to keep mine for longer than he did!

“As for the comparisons with David Luiz, he’s a really good player, so I’m happy with it.

“I reckon mine is the best in the Premier League,” he joked. “Who has the worst? Marouane Fellaini, though he’s gone now. It’s like a bad version of mine!”

Guendouzi expressed regret that Arsenal will not be playing Champions League football in 2019/20, but admitted that he was pleased with his first season in north London after being thrown in at the deep end.

“As soon as I signed for Arsenal, I knew that I’d have a chance to get a decent amount of playing time in the first team,” he said.

“I wouldn’t have had that confidence had I signed for another club. The management here said I’d get the chance but I didn’t know I’d play as much as I have.

“I knew I could win the confidence of my coach and team-mates by working hard.”

Read the full interview with Matteo Guendouzi in the August 2019 issue of FourFourTwo magazine, out now! It’s part of our 23 reasons why it’s still good to be a Gooner. Plus, we hail the stylistic genius of Andrea Pirlo, head to Monterrey for a mad Maxican derby, reflect on Jose at Chelsea 15 years on, recall a particularly damaging Panorama documentary and much, much more...