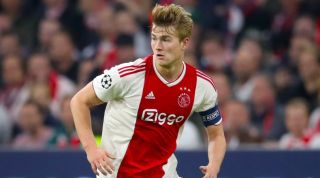 The 19-year-old was a star in the Ajax side that took apart Barca’s rivals Real Madrid en route to the Champions League semi-finals this summer – and is performances made him one of Europe’s most sought-after prospects this summer.

It seemed the Catalonians were favourites for the Dutch international’s signature, having already landed team-mate Frenkie de Jong.

But these latest reports from Spain could mean a move to European giants Bayern Munich or Juventus is on the cards instead.

The eye-watering cost of the centre-back could still prove a stumbling block, however: Ajax are thought to be demanding £75 million for the teenager.