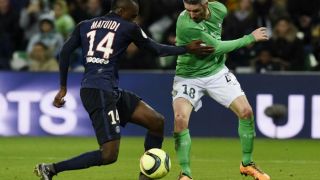 The victory, sealed by a Zlatan Ibrahimovic brace, ensured Laurent Blanc's men have not lost for 32 league games, matching an unbeaten run completed by Nantes between July 1994 and April 1995.

PSG had to wait an hour to open the scoring, Ibrahimovic turning home Serge Aurier's cross, with the Sweden international adding the second goal with virtually the last kick of the match.

"Against teams who play three at the back it's complicated, but you have to manage, this is a fact," Matuidi told Canal+ after PSG recorded their 13th consecutive victory in all competitions.

"We have corrected this at half-time, it was easier in the second period.

"We put up our game and talent spoke.

"This year is really good, it is currently breaking records.

"It is a club that has a lot of ambition."

Referring to PSG's upcoming Champions League tie with Chelsea, France international Matuidi added: "It's good to have games like that where it's a bit hard, it prepares us for the big day."