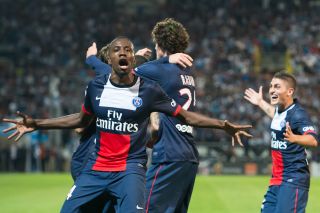 The midfielder created the first for Edinson Cavani on Sunday and scored the second as the league leaders dropped points for the first time since the end of last month.

Matuidi admitted that PSG last season might have lost when two goals behind, but the team's recovery shows the strength coach Laurent Blanc has at his disposal.

"We struggled to get the ball," he said. "We fought back with our strength of character.

"We wanted to continue our unbeaten run, we knew it would be complicated to beat Saint-Etienne, it was.

"We are happy to be back to 2-2 and that this series (without defeat) is not stopped."

Victory over Saint-Etienne sees PSG and Monaco as the only sides yet to lose in Ligue 1 this season, but the 26-year-old denied claims that it was going to be a straight fight between the two clubs for the title.

"No (it won't)," he added. "There are two undefeated teams (with Monaco) plus a Lille training in great shape.

"The season will be long and bumpy, but we'll be there (top of the table)."