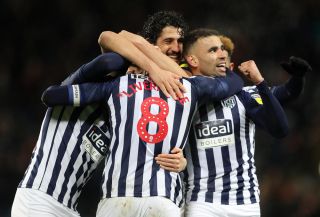 West Brom head coach Slaven Bilic was full of praise for the maturity shown by his Sky Bet Championship title chasers after a routine 2-0 win over Preston.

First-half goals from Hal Robson-Kanu and captain Jake Livermore secured a fifth win in six outings for the  Baggies.

It leaves Bilic’s side seven points clear of second-placed Leeds, who play on Wednesday, and 10 ahead of Nottingham Forest in third as they remain on course for promotion to the Premier League.

“It was a very mature performance,” said Bilic. “We looked in control and on the front foot.

“People are talking about routine but we made it like that.

“We were playing against a team that normally has great intensity and maybe the best in the division in transition.

“We did to them what they were going to do to us – the intensity, pressing, second balls – all of that gave us a platform to catch them in transition.”

Bilic was delighted with the quality of the pass from Callum Robinson for the first goal scored by Robson-Kanu.

“The ball was unbelievable – and he meant it,” he said. “The quality and the distance – it was like ‘wow’. And when you score a goal like that it gives you confidence.”

Both managers felt the red card to Preston right back Darnell Fisher was harsh after he was dismissed for a lunge on Robinson in the 64th minute.

Preston manager Alex Neil said: “At the time I wasn’t quite sure, having seen it back I think it’s a soft one.

“It was harsh but it continued a theme of the officials all game.”

Neil had few complaints at the outcome of the game, or his team’s performance, however.

It was Preston’s first away defeat since December, though they remain in the final play-off spot and still have a three-point advantage over seventh-placed Bristol City.

“I didn’t think we played particularly poorly,” he added. “The biggest difference was their front four, who threatened all game.

“The biggest disappointment for me was probably the cheapness of the goals.

“For their first goal we gave the ball away on the halfway line and for the second we gave it away on the edge of our own box.”