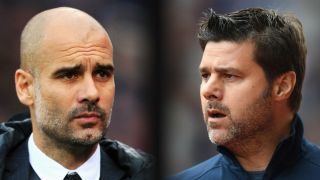 Guardiola made the comment in the aftermath of City retaining their position at the top of the Premier League by winning 1-0 away to champions Chelsea, in the final fixture before the international break.

When assessing the strength of City's title rivals, the former Barcelona boss said: "We're in September. Chelsea won 13 games in a row last season. We have [Manchester] United and the Harry Kane team, who scores every game two or three goals."

Kane was indeed in stellar form during September, scoring 13 goals for club and country to scoop the Premier League player of the month award.

The 24-year-old striker continued his purple patch with both goals in England's back-to-back 1-0 wins over Slovenia and Lithuania to secure their place at the 2018 World Cup, but Tottenham manager Pochettino was unimpressed with his counterpart's words.

Speaking ahead of Spurs' meeting with Bournemouth at Wembley, the ex-Espanyol coach described Guardiola's observations as "sad" and suggested it was not uncommon for him to overstep the mark post-match.

"I know Pep very well and when he is excited, after an amazing victory against Chelsea, sometimes he struggles to keep his position and be a gentleman," Pochettino said.

"The situation didn't affect me but, in reality, it was very disrespectful for many people."

When Pochettino's thoughts were relayed to Guardiola at his pre-match briefing for Saturday's home game against Stoke City, he appeared genuinely dismayed.

"I'm disrespectful?" he responded, before looking down at his desk and shaking his head.

"I think Mauricio, for the times we've met each other and the times I spoke with him… maybe my English is not quite well.

"I never was disrespectful for my colleague in the press conference. Never.

"When I said 'Harry Kane's team' it was because of the fact Harry Kane was scoring a lot of goals. I know very well that Tottenham is not Harry Kane alone."

Guardiola spoke regularly of his admiration for Spurs' style under Pochettino last season.

The north London club handed him his first defeat in the Premier League before battling to a 2-2 draw at the Etihad Stadium in January.

City then prized right-back Kyle Walker from Tottenham during the last transfer window and Guardiola was keen to remind both Pochettino and those present of his previous praise.

"I think last season, the guy who appreciated the way they play the most was me," he said. "When he lost against Chelsea in the [FA Cup] semi-final, I said it was incredible because Chelsea shot on target four times and scored four goals. Always I said Tottenham was one of the best teams.

"So I am really disappointed if he said that. I was never disrespectful in this period here about my colleagues.

"I respect a lot what Tottenham have done in the last two or three years, a lot of credit [to them] in the way they play and the way they show football in the Premier League – the way he proposes, always attacking. I said it many times, just review it.

"I give a lot of credit about Tottenham. Maybe you don't believe, but they are always a contender. Last season they finished better than us. That means a lot.

"But it's okay - I spoke many times with Mauricio – if he believes that."

Guardiola famously clashed with United boss Jose Mourinho during the latter's tenure at Real Madrid – a feud he alluded to here – but appeared in no mood to spark a fresh war of words.

"Maybe I should say 'Pochettino team' instead of 'Harry Kane's team'. I did it because he scored two goals more against Huddersfield and he got more with the national team," he added.

"I think Mauricio made a mistake. Never, never in my career was I disrespectful. Maybe I can answer when someone attacks my team or my club but I would never be disrespectful about what Mauricio and Tottenham did.

City are due to host Tottenham in the Premier League on December 16.