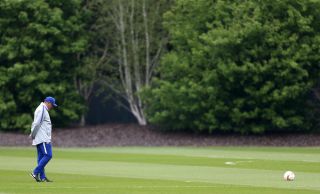 Maurizio Sarri has admitted Chelsea are “in trouble” for their Europa League semi-final first leg at Eintracht Frankfurt after Gary Cahill sustained an Achilles injury.

Cahill could well have already played his last Chelsea game with his contract expiring this summer, but head coach Sarri hopes to have him fit quickly.

Maurizio Sarri is speaking to the media at the Commerzbank-Arena… #FRACHEpic.twitter.com/h4lzSNzWKK— Chelsea FC (@ChelseaFC) May 1, 2019

“Gary Cahill has an Achilles tendon injury,” said Sarri. “We hope to recover him in one week.

“We’ve played 58 matches so injuries are typical. We were lucky previously but not in the last 10 days.”

Chelsea skipper Azpilicueta insisted he is ready to step in at centre-back if required.

“I’m ready to play wherever the manager needs me to play,” said Azpilicueta. “But I can adapt to different positions. So I’m ready for it.”

Sarri explained that Germany international Rudiger will be sidelined for three months after surgery to repair the meniscus in his knee.

The Italian revealed Rudiger actually tore his meniscus in the Blues’ 2-0 Premier League loss at Liverpool on April 14.

Rudiger had battled to play through the problem until the end of the season, with the club aware he would need surgery but also knowing he could not exacerbate the injury.

The 26-year-old returned to action for Sunday’s trip to Manchester United only to pull up again.

“Rudiger is out for at least three months I think,” said Sarri. “He’s upset of course but is very strong and I’m sure he will come back stronger.

“We tried to arrive at the end of the season, but the injury was there. He had a problem with his meniscus, it was broken.

“We tried to arrive to the end of the season, because sometimes you are able to play for one month (with the injury). But the situation was the same.”

Sarri has every confidence in Denmark defender Christensen stepping up at the denouement of Chelsea’s quest for Champions League qualification.”Christensen during the season has played about 25 matches, so he is ready,” said Sarri.

“I hope he will be very fresh, mentally and physically. But I am sure he is ready to play in every match. It’s not a problem. The problem is only the number, because we have only two fit centre-backs.

“But I’m really very confident with Andreas because he’s ready. He’s played very important matches very well, so Christensen is not a problem for us, the problem is the number at the moment.”