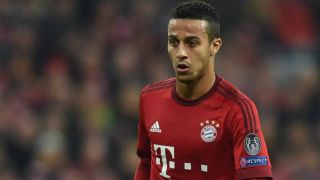 Thiago left Camp Nou to join Bayern Munich in 2013, while Rafinha is preparing to take part in the Olympics with Brazil having endured a season ruined by a cruciate knee ligament injury last term.

Speaking on Radio Barcelona, 1994 World Cup winner Mazinho said: "I hope that one day Thiago can return to Barcelona.

"He's a player with Barcelona DNA that he has had since his early days here and you never know – the football world has many twists.

"The doors are always open to everything and who knows if one day we will be able to have the two of them here again.

"There's no resentment [over selling Thiago to Bayern], quite the opposite. We are grateful to Barcelona for their actions."

Pep Guardiola persuaded Thiago to make the same journey from Catalonia to Bavaria as himself, but the midfielder remains settled at Bayern despite his boss' switch to Manchester City.

"He's a Bayern player and he's content and happy to be at a club where he's working well. He's renewed his contract and is very happy there," Mazinho added.