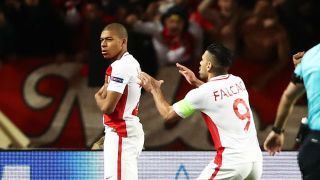 Kylian Mbappe should stay at Monaco for another season before looking to secure a move to one of European football's giants, according to Ludovic Giuly.

It has been a breakout campaign for 18-year-old forward Mbappe, who has hit the headlines with a run of 18 goals in 18 games to help Monaco close in on the Ligue 1 title and reach the Champions League semi-finals.

The France international has understandably been linked with a move to the likes of Real Madrid, Barcelona and Manchester United at the end of the season.

However, Giuly thinks he should spend another campaign at Stade Louis II and only think about departing if he produces the same statistics.

He told Omnisport: "For me, Mbappe is in the process of hatching. He has all the qualities to become a very great player. He scores goals, he is fast, he has good vision.

"He must stay another year in Monaco to see if everything is going well, if he can grow up.

"From there, if he has the same stats and the same game as this year, he can go where he wants and he will be a great player."

Monaco host Juventus in the first leg of their Champions League semi-final on Wednesday.

Giuly was a member of the side that reached the 2004 final only to suffer a 3-0 defeat to Jose Mourinho's Porto.

However, he feels the group of players at Leonardo Jardim's disposal are of superior quality and are capable of doing "something great" in the Champions League.

"Monaco are doing the same season as us in 2004. We were beaten in the final against Porto and we lost the championship because we were tired. But today, Monaco has more talent than us," said Giuly.

"They have young quality players. They have the opportunity to do something great in Champions League and in Ligue 1, I think it's doable.

"I'm glad to see Monaco at that level."