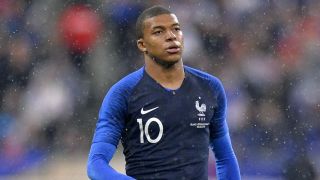 Kylian Mbappe insisted he was feeling no ill-effects from his injury scare while acknowledging that the likes of Antoine Griezmann, Ousmane Dembele and himself will have to be clinical if they are to propel France to World Cup glory.

The Paris Saint-Germain forward limped out of training on Tuesday nursing a left ankle problem following a challenge from team-mate Adil Rami.

Mbappe subsequently tweeted to calm fears that he could miss Les Bleus' Group C opener against the Socceroos on Saturday, and the 19-year-old was in high spirits as he faced the media on Wednesday.

"Club or national training is the same. We play as we train. These are things that happen and will happen again. It's a bit innocuous, it's a little late, certainly, but no-one died!"

Mbappe also spoke about the possibility of lining up alongside Griezmann and Dembele in attack - a prospect that greatly excites the teenager, although he concedes the trio will have to continue to work on their relationship.

"We are three players who appreciate each other and there is a lot of movement and speed," he said.

"But we can improve our defensive [work]. We cannot arrive in this competition with a team cut in half.

"We must also be more effective in front of goal, we will not have 60 opportunities. Sometimes we will have one and it will be necessary to put it away."

Asked for his thoughts on the favourites to lift the trophy come July 15, Mbappe named three sides who he feels are ahead of Didier Deschamps' men in that regard, and one for whom he sees 2018 as the last chance for a golden vintage to perform on the grandest stage.

"Brazil, Germany and Spain are at present three teams that are a little ahead of us," he said. "After, there is Belgium. For them it's now. With their generation, I think it's the last chance."