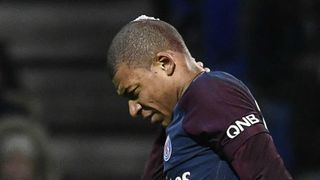 Paris Saint-Germain have confirmed Kylian Mbappe did not suffer a serious injury during a 2-1 defeat to Ligue 1 title rivals Lyon on Sunday.

Lyon led thanks to Nabil Fekir's second-minute free-kick when Marco Verratti delivered a raking lofted pass for Mbappe - who had already been left with a head wound by an aerial challenge - to chase into the box.

Anthony Lopes raced off his line to meet Mbappe, the goalkeeper getting a touch on the ball before unintentionally clattering into the teenage striker.

Mbappe received lengthy attention on the pitch but was able to walk off the field unaided before departing down the tunnel on a stretcher.

But PSG - who saw their lead atop Ligue 1 cut to eight points by Memphis Depay's sensational stoppage-time strike - played down fears the teenage striker had been badly hurt in the incident.

"There is nothing serious," club doctor Eric Rolland told Canal+ at half-time, the medic adding that Mbappe did not need to be taken to hospital for treatment.