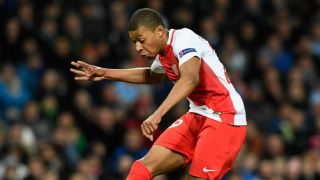 Mbappe has been linked with a €180million move to Real Madrid, although Monaco are in talks with the striker over a new contract, while Lemar is a target for Arsenal and Fabinho was strongly linked with Manchester United before they signed Nemanja Matic from Chelsea.

The Ligue 1 champions are determined to hold on to the trio and Jardim - whose side start their title defence at home to Toulouse on Friday - says they are ready to play a part in the new season.

"All the players who were important last season are important to keep for the club," Jardim told reporters. "But it has been showed over the years that it's not always possible to keep the players, and you know how our project works.

"So our goal is to work well with players who will stay here after the transfer window closes.

"Yes, [Mbappe] did not score in pre-season, but he is working hard to change things. It's not only about him, all the young players who were here last year and had a great season, Fabinho, Lemar, Kylian, we're talking about them joining other clubs, but they stay focused.

"Of course, Fabinho and Lemar are older, they may be a bit more mature, but Kylian, even these last two days, he's been working well. They know that the most important thing is the pitch."