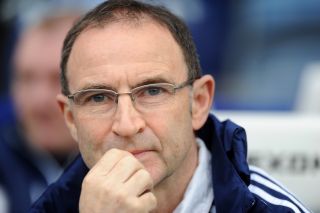 Ipswich Town manager McCarthy has been strongly linked with returning for a second spell in charge of the Republic after Giovanni Trapattoni was sacked in September.

But O'Neill is reported to be on the verge of replacing the veteran Italian, who paid the price for failing to guide Ireland to the FIFA World Cup next year.

McCarthy again stressed on Friday night that he had not held talks with the Football Association of Ireland and the 54-year-old maintains that O'Neill is set to take his first role in international management.

McCarthy told Sky Sports: "I've said all along, I haven't been asked about it and I don't see why I should have to answer about it, the questions are hypothetical.

"I've said all along Martin O'Neill is getting it, I said that six weeks ago and I think you'll find that's the case."

O'Neill, 61, has been out of work since being sacked by Premier League strugglers Sunderland in March and he is understood to have lined up Keane as his assistant.

Former Ireland captain Keane was sacked by Ipswich in January 2011 and has since been working as a television pundit.

The outspoken 42-year-old divides opinion in Ireland following his high profile bust-up with McCarthy during the 2002 World Cup.