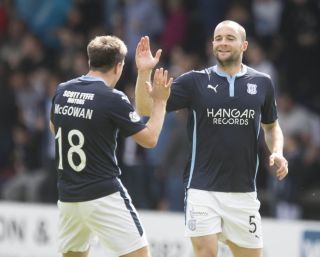 Paul McGowan has told Dundee chief John Nelms the answer to his managerial conundrum is sitting under his nose in the shape of James McPake.

Managing director Nelms is sifting through more than 150 applications from hopefuls looking to replace Jim McIntyre.

The Dens Park outfit moved to axe McIntyre last week after a run of 10 consecutive defeats led to the club’s relegation.

Former defender McPake has now been put in caretaker command as they round off their Ladbrokes Premiership campaign at home to St Mirren on Saturday.

But McGowan reckons his old team-mate is the prudent choice to become the permanent boss as the Dark Blues prepare for life in the Championship.

“I think James could be the answer,” said McGowan. “Hand on heart, why not?

“It’s not going to cost anything. He knows the club inside out, has a great relationship with the fans. The training has been amazing since he took over.

“If you need experience, get someone in to help James.

“People know Jazza is my mate, but the club has forked out a lot of money on managers over the last couple of years.

“But we’re in the Championship now, we’re not going to have the money, so why not give it to James? He can bring that freshness in.”

McIntyre voiced frustration this week that he was not given a second transfer window to try and turn around a side that had lost seven out of eight games when he took over from Neil McCann in October.

But McGowan insists no-one at Dens is free of blame following a nightmare campaign.

“Nothing has gone right for us this season,” he said. “I never want to see a man lose his job.

“The players have let him down, but both the players and the manager have to take huge responsibility for what’s been happening. It’s not been good enough.

“Did I agree with everything? No, I didn’t. It’s hard. We just didn’t click as a team. We looked disjointed.

“We take huge responsibility for that. The players will take most of the criticism as it’s us who go out there, but we need a big helping hand with other things that go on with being club manager.

“I’m not going to go into it. It’s done. We didn’t do enough, let’s get that straight.

“But all of us involved, including Jim and (assistant boss) Jimmy Boyle, should hold our hands up because we were miles off it.”