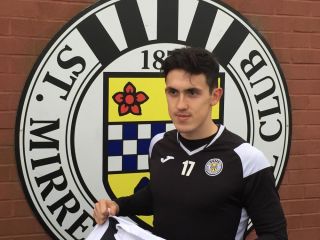 McGrath is from Athboy in County Meath, where Gaelic football is the most popular sport.

And ahead of the William Hill Scottish Cup fourth round tie against East of Scotland League side Broxburn Athletic on Saturday, the former Republic of Ireland Under-21 player described his pathway to Paisley.

He said: “I grew up in a small town called Athboy, County Meath, an hour to Dublin and an hour to Dundalk where I was last playing, a kind of no man’s land.

“It would be a county more recognised for Gaelic football. I think the county has only ever produced one (soccer) international and that was Darragh Lenihan last season.

“It is probably not a county renowned for footballers but it was my first love, since when I was young. It was probably the family I was born into, my dad was a mad football fan, he played football locally.

“He tells me he is the best player ever but I don’t know about that. He coached my brother’s team, he is five years older than me and I used to tag along with him and play with all the lads.

“So from an early age I was engrossed in the football world.

“We had two goals out the front garden. The whole school would be over playing after school so I grew up playing it.

“My family is booked to come over on Saturday morning, my mum and dad and my girlfriend as well. They go back on Monday and my dad is back on Wednesday morning for the Rangers match.

“He will probably be over twice a week. He has been a great influence in my career.

“I feel ready for Saturday but it’s up to the manager.”