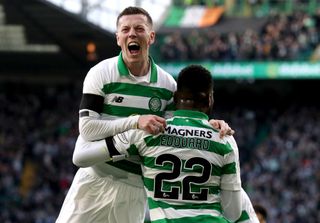 Callum McGregor believes Celtic achieved their three main goals in the first half of the season.

Now the midfielder feels there is the hunger and focus to ensure they meet the major challenge ahead of them after the winter break.

Celtic went into the shutdown on a low after losing a home derby for the first time since 2010.

Rangers’ 2-1 victory at Parkhead put them two points behind the Ladbrokes Premiership leaders with a game in hand and followed a Betfred Cup final which they dominated but lost to their city rivals.

However, Scotland midfielder McGregor put the first half of the campaign in perspective at Celtic’s training camp in Dubai before looking ahead to a crucial period.

McGregor told Celtic TV: “When we set our goals at the start of the season we wanted that first trophy and we wanted to come away sitting well in the league, and we have done that as well.

“And we wanted to make an improvement in the Europa League. So I think we have achieved all three things.

“There’s a big challenge ahead in the second half of the season.

“We have trained well this week, the boys look hungry as well, so I think it will stand us in good stead for the second half of the season.”

McGregor has the right to appreciate the benefits of the break more than anyone. He played 69 games last season and he has already featured 42 times this term for club and country.

“With the amount of games in the calendar year, it makes the training time a lot shorter,” the 26-year-old said.

“You get pre-season to implement our style of play and get the boys together on the grass as a group. And as the season rolls on, you lose that and are more just recovering and preparing for games.

“It’s a good idea to come out here, get everyone together and refocus our idea in terms of our identity, the way we want to play and press and pass and move the ball.

“It’s been a valuable week in terms of getting everyone together and doing that style of training.”

Celtic’s squad in Dubai was cut twice this week with wingers Scott Sinclair and Lewis Morgan departing, the former to sign for Preston and the latter amid reports that Inter Miami have had an offer for the player accepted.

McGregor admits Celtic need other wide men to step up – Mikey Johnston, Daniel Arzani and Mohamed Elyounoussi are all recovering from injuries.

“Scotty was an incredible player for the club so everyone should thank him for his contribution,” McGregor said.

“The boys who are in his position now need to step up.

“The boys have looked good throughout the season, Mikey has come in and done great and it’s a learning curve for him to keep going and keep improving. The boys in the group will keep pushing him.

“You have boys behind him as well. Young Daniel has come back from his injury. He is getting more time on the pitch and in training he is looking good as well.

“The challenge is for these guys now to take the mantle.”